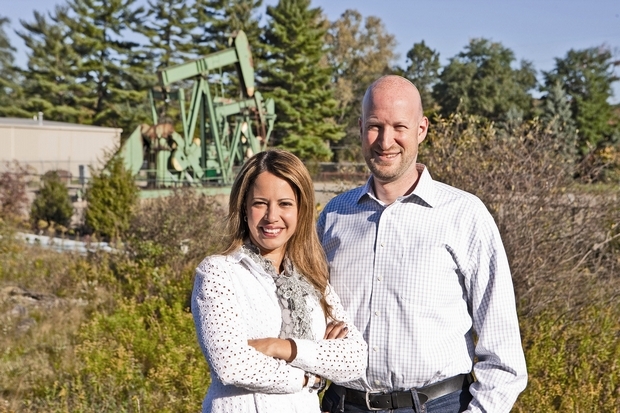 The Beverly Hillbillies struck black gold — oil, that is — when old Jed Clampett was out a huntin' for some food. Moved his family to Beverly... Hills, that is.

America watched the Clampett family's antics for nine TV seasons; who doesn't hope for a windfall like finding some "Texas Tea"?

Michael Zwick can't promise a Clampett-style gusher, but he brings hope for the next best thing: cash money.

His Southfield-based company, Assets International LLC, tracks down people who are owed royalties by oil and gas operators and don't even know it.

And, yes, there's a lot of money in that bubblin' crude.

"We had a case out of Texas where we found a quarter-million for a guy living in the backwoods of Arkansas," said Zwick, president of Assets International. "We flew him into Texas and he gets a check for a quarter-million dollars."

The mineral rights work is an offshoot of Assets International's core strength in tracking down missing heirs, and the company's experience in growing the business is a case study in branching out with existing strengths.

There is no estimate of the total value of these missing mineral-rights claims, but at least 8.5 million Americans are paid or owed royalties on active production sites, according to the Tulsa, Okla.-based National Association of Royalty Owners. On one oil well, the nonprofit found that more than 300 individuals in 46 states were receiving payments because they had some claim to the mineral rights.

But not everyone is even aware of their claims.

The state of Oklahoma alone reports that it has more than $100 million sitting in its coffers, waiting on for at least 262,000 mineral-rights owners to claim their spoils. (Michigan does not track money owed to missing mineral rights heirs.)

How can you not know?

Some families have held tight to those mineral rights, carefully tracking them and passing them down. Others, however, have sold off their rights or forgotten to tell successive generations about what lies beneath. So as oil and gas operators come to drill, they have to untangle more than 100 years worth of land ownership and find both the surface and mineral rights owners.

"We found money that belonged to an owner whose family got the mineral rights from the government before Oklahoma was even a state," said Zwick, 42. "Mineral rights aren't taxed if they are not producing, so someone could have gotten them 100 years ago and never mentioned them to the family and they just get lost."

In most states, oil and gas operators are required to get leases — and pay royalties to — everyone who owns mineral rights within a square mile of the well. But when all of these owners can't be located, the oil and gas companies are legally allowed to create escrow accounts — known as suspense accounts — where the royalty payments stack up.

"These accounts have to be segregated from the rest of an operator's money," Zwick explained. "They have the cost of accounting for them; they have the exposure to state regulators who want to inspect their books to make sure they are maintaining them properly."

Instead, Zwick makes them this offer: Let us look at your accounts and we'll go track down the owners. It saves the companies money because he takes the problem off their books and takes his cut — between 10 percent and 35 percent, depending on the complexity of the case — from the newly found heirs. In Oklahoma alone, that activity could be a $10 million payday.

Assets International didn't start out tracking down modern-day Clampetts. Neal Duchin founded the private-investigation agency in 2001, specializing in finding missing heirs. Zwick was initially involved as the company's counsel, but in 2004 he joined full time as a partner and president. By 2009, the company had grown to $1.5 million in annual revenue and 16 employees.

Business was steady, but Zwick was on the lookout for new opportunities.

It came to him in a most unusual place. He was at a conference of probate lawyers in Texas, networking with those who might later employ his skills. One of the attorneys casually mentioned that he might want to talk to the "land men."

"I looked at him and asked, 'What's a land man?' 'I'm a Jewish boy from Detroit,' I told him," Zwick remembered.

A land man, he learned, is who oil and gas operators hire to locate the owners of the mineral rights pooled underneath land they hope to drill.

At first, it seemed like a crazy idea. What did land men and mineral rights have to do with his business of finding missing heirs?

But then, he said, he realized that "just like with missing heirs, the oil and gas industry has money sitting and waiting for people who don't know that they are entitled to that money."

In the language of business consultants, what he did is known as adaptive advantage, or analyzing the core of your business and determining how it can be applied to other markets.

"One way to reduce risk in your business model experimentation is to apply something you already know how to do to another domain," said Martin Reeves, senior partner at Boston Consulting Group and director of its worldwide Strategy Institute. "Most companies think in products or markets, but they should actually look at their capabilities underpinning their products."

For Zwick, that meant understanding that his private investigation firm's core strength was actually finding information, not people. Once he realized that, he knew the Assets International team could use their skills to enter markets that might, at first, seem disparate.

"We just kept coming back to this," Zwick said. "We found so many similarities between missing heirs and finding the owners of mineral owners that we realized it wasn't much of a stretch, even though it was in a different industry. It was the same application of our skills."

Still, Zwick and his partner put the idea on hold, not quite ready to expand. They debated and thought for two years before deciding, in 2011, to dip their toes in oil, so to speak.

Zwick's first step was to reach out to a fellow member of Entrepreneurs' Organization, a national nonprofit based in Alexandria, Va., that connects second-stage companies. He called an attorney in the Oklahoma chapter, someone he'd never met, and the two chatted for about 20 minutes.

That conversation was enough to get him researching, making calls and selling his services, persuading oil and gas operators to let him look at their suspense accounts.

They started with just a few cases, but after early initial success — as with the gentleman in Arkansas — Zwick decided it was the perfect way to expand.

"That case in Arkansas really lit a fire under our research and sales people," he said.

For the Boston Consulting Group's Reeves, that quick decision is a hallmark of successful companies.

"You can't survive in a turbulent world without innovation, but innovation, especially for small companies, can be life-threatening," Reeves said.

"So it has to be about advantaged experimentation, a systematic process for taking small risks and closing down things that don't work and scaling things that do. It's pattern recognition and agility, not letting things languish for years as a pilot or a minor product. That sounds easy, but it's extremely hard to do."

Today, mineral rights make up about 25 percent of Assets International's business, and revenue is projected at $2 million. Zwick is growing that part of the business, but Reeves reminds that all entrepreneurs should be looking for their next market, next growth opportunity, next innovation.