Michael Zwick does not consider himself the stereotypical private investigator. Admitting he does not drive a Ferrari and wear Hawaiian shirts (ala Tom Selleck, circa 1980s), what he does do, however, is find missing heirs or unknown heirs and provide them with an inheritance that in many instances they did not know they were entitled. 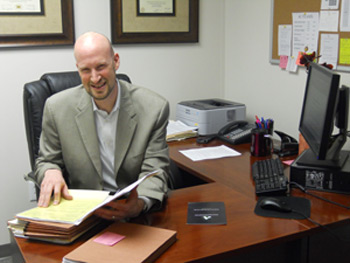 and licensed Private Investigation agency. Founded in 2001, the company reunites individuals and companies with non-real estate cash assets. Assets International’s focus is to assist probate attorneys or legal representatives of estates or trusts in finding missing or unknown heirs, devisees and other beneficiaries. They find the “needles in the haystack.”

Assets International is comprised of a team of multilingual researchers who have years of genealogical investigative experience, allowing them to build family trees from documents written in many languages. It is not unusual for staff members to routinely travel worldwide to meet with heirs or conduct research. Additionally, Assets International has developed a global network of colleagues to assist in their investigations.

Each missing heirs case is unique and brings about its own set of challenges, but Zwick beams with pride as he discusses recent cases where his company located not one, but two homeless individuals, both due a substantial amount of money. And, in both instances, Assets International found these people after numerous attempts by the legal system failed.

“These were difficult assignments,” admitted Zwick. “But, this is the premise of what we do and this is our focus – finding missing heirs.”

Zwick did not set out to be a private investigator. Earning his bachelors degree in economics from Yeshiva University and his law degree from the Benjamin N. Cardozo School of Law, Zwick eventually started his own law practice in Southfield. However, it was through an acquaintance, Neal Duchin, that his professional life would change forever.

Initially, Duchin founded Assets International with the intention of assisting individuals and businesses on how to properly use the legal system in the recovery of assets to which they have legal entitlement. As the company grew, Zwick worked as a freelancer, helping Duchin with the legal aspects of running the company. It soon became apparent to them, through their due diligence on various investigations, that a market was underserved and a niche was available: locating missing heirs.

As the workload increased and the company’s focus shifted, Zwick put his law practice on the back burner and joined Assets International full time in 2004.

Today, Zwick oversees 17 employees, divided between Southfield and Beit Shemesh, Israel, with other U.S. locations planned for the future. This year, Assets International projects to recover more than $4.5 million on behalf of their clients, up approximately 20 percent from 2008. Despite the recession and being headquartered in southeast Michigan, Assets International is thriving. Zwick is grateful and happy his company can reunite people with money they did not know they were entitled to.

“To be able to tell someone ‘you have $40,000 coming to you,’ especially in this economy, is very gratifying. We’ve found money for homeless people who were then able to move out of shelters, get a place of their own and turn their lives around. Indirectly, we’ve also reunited family members that haven’t seen each other in decades.”

Zwick, 39, grew up in Southfield, a “Sinai baby,” and attended Akiva Hebrew Day School and Young Israel of Southfield. He was active in many organizations including serving on the Board of Akiva Hebrew Day School, a Board member and officer with the Young Adult Division of the Jewish Federation of Metro Detroit and on the Board and executive board of Young Israel of Oak Park. However, it was through Hillel of Metro Detroit that he would meet his future wife Lesley, herself a successful entrepreneur at Chocolate Impressions, also in Southfield. Married for six years, they have two daughters, Emma and Madelyn.

Zwick attends daily prayer services, minyan, at 6:15 a.m. and observes holy days rituals, which he admits can be a struggle in today’s electronic, fast-paced world.

“It can sometimes be a challenge, when you know business things need your attention. But, that is where careful planning and setting priorities are essential. You can run a successful business and still honor your faith.”

Zwick makes it work, and personally and professionally, he is enjoying success and the fruits of his labor. And, thanks to the company’s investigative efforts, many others are as well.