Attorney, Pi - Mundane as it Sounds, Searching Proprietary Databases and Examining Public Records Can Lead to Profits and Rewards

ONE PART DETECTIVE, one part attorney, Michael J. Zwick is like a character in a TV show. The Southfield sleuth spends his days searching for lost heirs - and whether he's scouring homeless shelters or graveyard headstones, he almost always gets his man.

"We had one case where a 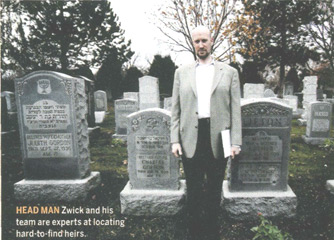 [woman] died and left $1.5 million to be distributed among [her] five daughters, one of whom had died," says Zwick, president of Assets International. "So the money was to go to the daughter's son, but no one knew where he was. It took us two months to track down his birth certificate in New York; he turned out to be a housepainter in Orlando."

In another case, five siblings were to equally split an inheritance of $200,000, but one of the heirs couldn't be found. "It turned out he was homeless in Sacramento," Zwick says. "Most of our cases are in the U.S., but we've found people in Norway, Pakistan, Hong Kong, the U.K. - you name it."

Zwick and his 14-person team spend their days tracking down the assets of defunct businesses, conducting background searches for human-resource staffs, and taking referrals from law firms, banks, and public treasuries.

Fees are predicated on the job. Most estate work is on a contingency basis -find the heir, and the firm typically gets paid a third of the inheritance. Background checks and public document searches can range from $100 to $150 an hour.

"One recent trend is tracking down landowners on behalf of an oil company," Zwick says. "Either the landowners need to sign off on drilling permits or the oil company wants to buy the mineral rights. In some cases, the original landowner dies, so we track down any heirs - which isn't always easy."

Following law school, Zwick took on criminal-defense work and civil litigation. But after finding success tracking down heirs, he and a handful of partners created Assets International in 2003. "We don't succeed in every case," Zwick notes. "We were asked to track down some heirs in Cuba, and the estate didn't want to send the money through traditional channels. But we couldn't resolve it. We only get paid when the money is delivered."

Assets International is a licensed private investigation agency and industry leader in locating assets and their rightful owners, as well as missing heirs, all over the world. Using proven investigative techniques combined with an individualized approach to customer service, Assets International has successfully recovered millions of dollars for corporations and individuals and located many missing and unknown heirs on behalf of families and estates.